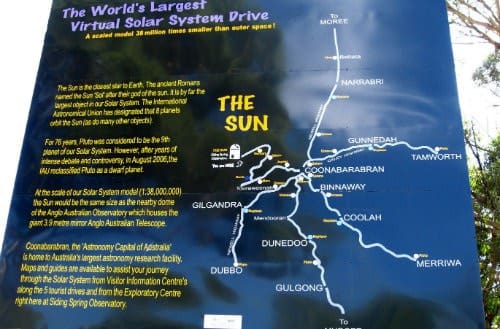 Strap on your seatbelts and launch into Coonabarabran, The Astronomy Capital of Australia. Experience a scaled model of our Solar System that’s 38 million times smaller than outer space!

The World’s Largest Virtual Solar System Drive is a daytime experience exploring the planets as if you were hurtling through space.

There are five drives that provide fascinating facts about the universe by three dimensional planets on billboards along the way as you shuttle from Pluto at the furthest reaches of the Solar System to the Sun that is at Australia’s largest optical astronomy centre, Siding Spring Observatory in Coonabarabran, Central NSW.

The planets are displayed on huge billboards with the size of the planets and the distance between each billboard scaled relative to the dome being the Sun.

You can also learn interesting facts about the Solar System and the unique features of each planet.

Out of this world facts: