NSW is home to some unusual pubs.

Why not call in on your next trip to one of the follwoing – or visit them all!

For the most filmed and photographed pub in the country you’ll have to head to western NSW to the township of Silverton. Over twenty films and television series have been filmed here including cult classics Mad Max and Priscilla, Queen of the Desert and blockbuster Mission Impossible II; making The Silverton Hotel one of Australia’s most iconic pubs. 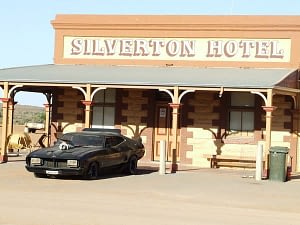 Oodnadatta Hotel or The Yorkeys Knob Boat Club? There are stacks of contenders for most unusual pub name in Australia, this is the country of Bong Bong and Rooty Hill after all, but we’d have to say it comes down to one: The Wobbly Boot Hotel in Boggabilla, NSW. Aside from being a euphemism for being drunk, the Wobbly Boot was also the inspiration for a popular country song by Stan Coster, eventually covered by Australian favourite John Williamson.

Located a whopping 1488 metres AHD, the town of Cabramurra, NSW is home to the highest elevation pub in the country and located within the Kosciuszko National Park. The Cabra, though initially built to service workers from the Snowy Hydro-Electric Scheme, has become a destination for travellers looking for a high-altitude beer.

It might be “just down the road” in Outback terms but this pub in NSW Corner Country is a long way from anywhere, 1200-kilometres inland from Sydney and over 300 klicks from Broken Hill.  Yet it was once on the Cobb & Co network and features murals by Australian artists including Clfiton Pugh and Russell Drysdale.

Officially known as the Narrowist pub in NSW, the Lord Wolseley Hotel is definitely one of the smallest pubs but known for its beer.

Overlooking the golden sands and sparkling waters of Byron Bay’s Main Beach is The Beach Hotel – a unique and iconic destination and Byron’s most famous pub.

Established in 1815 and located in Windsor. The Hotel’s heritage and history tells us of times when the 73rd Regiment Red Coat Soldiers occupied the upper floor while the convicts were chained up in the cellar areas after spending long hours building this wonderful establishment by hand.