Stories around the Campfire 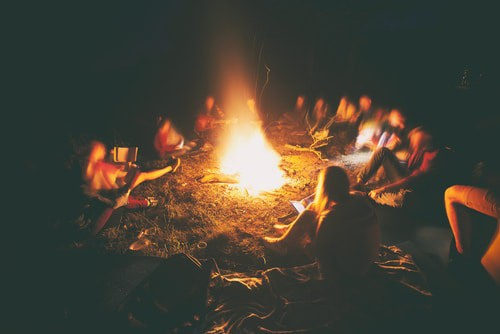 Sitting around a campfire in the dark is a perfect time for telling stories.

Relax and be mesmerised by the campfire flames and gaze at the stars in the sky and share stories fact or fiction, funny or scary.

Be creative and have fun using different voices and sound effects to enhance the story and keep you audience wanting more.

Here is a funny story to get you started:

When my grandmother died, I was given the task of cleaning out her house in preparation for selling it. The second night I was staying in the house, I heard a faint “rap, rap, rap” sound somewhere in the house. I got up and searched for where the sound was coming from. In the hallway, it was louder, “Rap, Rap, Rap,” and seemed to be coming from downstairs.

As I went downstairs, the sound became louder, “Rap, Rap, Rap!” I explored the entire downstairs, but could not find the source of the sound. It seemed to be coming from under the floor of the kitchen. The cellar?

When I opened the door to the cellar, the sound was much louder – “RAP, RAP, RAP!”

Although I was scared, I had to find the source of that rapping. The sound became louder as I descended the stairs. In the corner was an old trunk. Now I could tell the sound was coming from the trunk. I opened the lid very slowly, and there it was – a roll of wrapping paper!