The Newell Highway is the longest running highway in New South Wales, stretching over 1060km from the Victorian border at Tocumwal to the Queensland border at Goondiwindi running through several regional country towns in western NSW.

The highway runs parallel to the eastern coast about 400 kilometres inland, traversing NSW from end to end as it passes through a wide range of terrain. The region offers wide open spaces, pristine national parks and river systems, fresh produce bursting with flavour and wines recognised as some of the world’s best..

The highway is also an astronomy delight, boasting numerous observatories. Major observatories include Coonabarabran, Narrabri, Gilgandra. However, the most famous one being the Parkes Radio Telescope, better known as ‘The Dish’.

The Newell Highway is named after H.H Newell, the NSW Commissioner of Main Roads from 1932 until 1941.

An outback opportunity to explore the unique towns, visit the marvellous attractions and meet friendly people along the Highway. 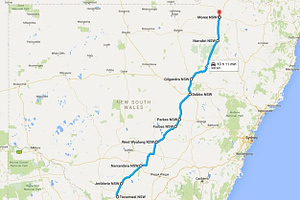