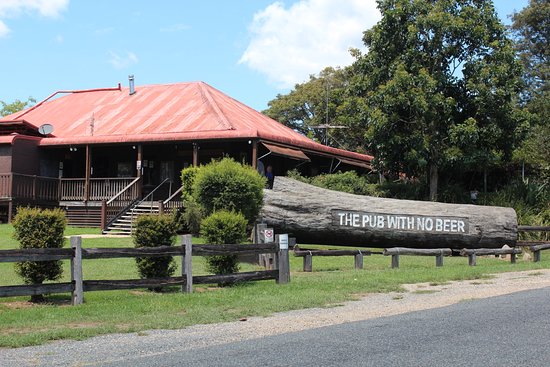 Wackiest NSW Country Pubs You Have To Visit

Pubs are a common site in most country towns and while they all have their own story, they have one thing in common, they are usually the beating heart of a country town.

Each pub has their own unique feature, whether it’s the odd collections of memorabilia that line the walls, the building itself, the location, their name, the regular patrons and the ability to attract thousands to their annual events.

Here is a list of some of the unique pubs that call NSW home.

The Dead Fox Bar’s got beer, but no walls…

It’s a pub with no walls but has plenty of character just like those who stand around it. At the Culgoa, there is nothing but a clay pan and a run-down racetrack but it’s where locals get together for sporting events.

Milparinka has a population of about 77 people but swells to 500 during the annual Gymkhana and located just one kilometre off the Silver City Highway and 250klm north of Broken Hill, The Albert is the only hotel remaining between Broken Hill and Tibooburra.

There aren’t many pubs where you can taxi your aeroplane right up to the front door to not only refuel the plane but yourself. Built in 1880, the Albert Hotel was the first to be licensed in Milparinka and is the only building open in the historic outback gold mining town. There have been renovations, however the Hotel is still essentially as it was in 1880.

Located just one kilometre off the Silver City Highway and 250klm north of Broken Hill, The Albert is the only hotel remaining between Broken Hill and Tibooburra.

Burren Junction is not only known for its hot bore baths that have therapeutic qualities, it’s become famous for the sign that sits out the front of the pub that says “Husband Day Care Centre”. It was erected five years for a “bit of fun” but it’s become a drawcard for tourists with the owner saying he would like to get $1 for every person that took a photo of it because he wouldn’t have worry about selling beers then.

Just nine people live in the town but the pub throws a couple of mean fundraisers a year.

The first thing you notice in this pub is the money on the roof. It’s not some fancy new trend of interior design, it’s a fundraising initiative where all the money goes to the Royal Flying Doctor Service (RFDS). The town, which is located just 80m from the rabbit proof, dog/dingo barrier fence, has two postcodes and just nine people. They hold a biannual event where they raise $16,000 in one day for the RFDS.

THE PUB WITH NO BEER, Taylors Arm

It’s one of the most well known country pubs thanks to the late Slim Dusty.

Nested at the bottom of lush green hills on the Mid North Coast, the pub has been made famous by a Slim Dusty ballad. It was built 1896 as a boarding house for a thriving timber and dairy community before it opened as a pub in 1903. During the 1940s the weekly delivery of beer was delayed because of a wild storm which flooded the valley. The pub went without beer for a week, which prompted local songwriter Gordon Parsons to write lyrics about the ordeal.

It’s name comes from a time in the 1940s when the pub’s weekly beer delivery was delayed, starving the locals of the cold stuff for an entire week.

THE CLUB IN THE SCRUB, Grawin near Lightning Ridge

The Club in the Scrub popped up virtually in the middle of nowhere on the back of opal fever.

It’s located in the unofficial shanty town of Grawin that has popped up in the remote corner of NSW on the back of opal fever. Thousands of people are lured to the Lightning Ridge region in the hope of striking it rich at the only place in the world with the coveted black opal. 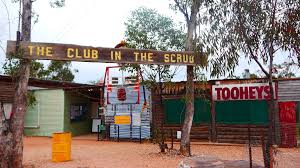 There might not be anything within cooee of this place, but that doesn’t stop the food being first class. There is nothing for 150km but has become renowned as the truckies’ stop of choice for its food.

This tiny pub in the Snowy Mountains is often covered in snow. Its claim to fame is that it’s the highest elevated pub in NSW located within the Kosciuszko National Park. Its main cliental is the Snowy Hydro Scheme workers.

This pub has quite a unique feature: A wall of Akubras belonging to people who have called Tibooburra home. It’s home to one of the most unique galleries in Australia. The walls of the main bar are adorned with Akubra hats that belong to people who called the outback town home. Many hats are weathered and beaten from owners working the arid landscape and they all have a story. The gallery started more than 20 years ago because the hotel was the Akubra hat agency. So when ringers or station workers travelled to pick up their new hat they would leave their old one behind.

There is also a memorial section of the wall dedicated to locals who have passed away.

The Packsaddle acts as pretty much everything you can think of.

In the outback it’s hot and dry and after a long drive this is a welcome sight. Like many country towns, it’s the only establishment for miles and it’s a one-stop shop. The roadhouse is a pub, restaurant, accommodation and petrol station as well as the NSW Ambulance, State Emergency Services and Rural Fire Brigade.

Other towns have the Big Banana, the Big Pineapple and the Big Prawn. Albert has The Big Rabbit Trap. As its name suggests there is a giant rabbit trap, 9.5m wide and 3m high, out the front of the pub. Residents in Albert, population 11, use the Big Rabbit Trap to try to lure more tourists to their tiny town, 140km west of Dubbo.

Every third Thursday of the month they have a music night, which has become legendary. Plenty of country music stars have played there including Amber Lawrence. 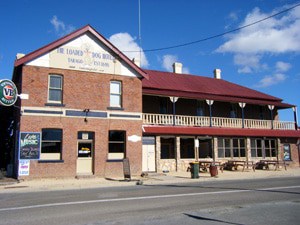