St. Patrick’s Day was a religious holiday celebrated only in Ireland but now it is a global event that commemorates Saint Patrick and the arrival of Christianity in Ireland and celebrates the heritage and culture of the Irish in general.

St Patrick is one of Ireland’s patron saints and died on March 17 in or around the year 493. He worked as a missionary in Ireland and it is believed that he banished “snakes” from the country although the term may have referred to druids or pagan worshippers.

The day is a popular observance in Australia as the Irish were among the first Europeans to settle in Australia and about 30 percent of Australians are believed to have some Irish ancestry today.

Celebrations generally involve public parades and festivals and it is customary to wear shamrocks, green clothing or green accessories. St Patrick is said to have used the shamrock, a three-leaved plant, to explain the Holy Trinity to the pagan Irish (God the Father, God the Son, and God the Holy Spirit).

The original colour associated with St. Patrick’s Day was actually blue. The green now commonly known and worn came about due to various influences such as Irelands nick name The Emerald Isle; the Shamrock green plant and the day being associated with Leprechauns. Legend has it if you were green you can’t be seen by a Leprechaun and if you don’t wear green, you will be seen and they will pinch you. 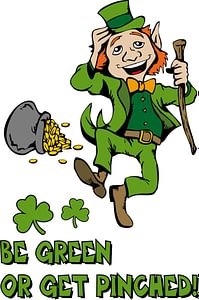