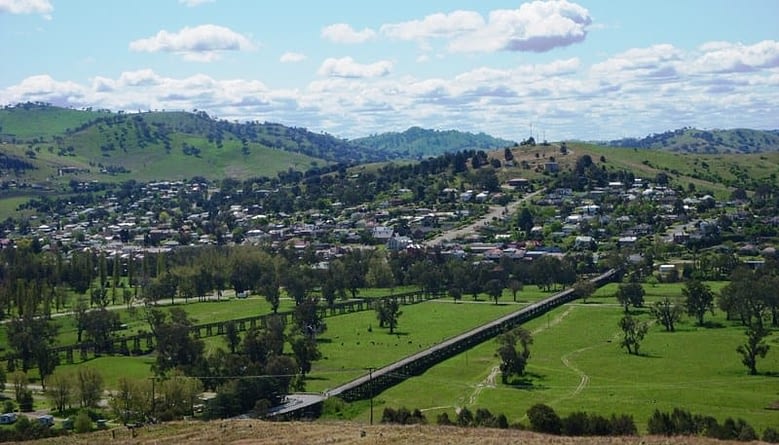 Gundagai is a charming, historic medium-sized country town set at the foot of Mount Parnassus above the Murrumbidgee floodplains.

Gundagai is a small town located in Southern New South Wales, Australia, making it an excellent stop over when travelling between Sydney and Melbourne.

Meaning:          The name Gundagai comes from a local aboriginal word meaning “the place of many birds”.

Its association with the famous folklore image of the Dog on the Tuckerbox the sentimental song ‘Along the Road to Gundagai’ which, in 1922, became an international success and the signature tune for the popular radio show ‘Dad and Dave’.

The Dog on the Tuckerbox
A famous bronze sculpture located in front of a restaurant and gift-shop complex north of the town on the western side of the Hume Highway and, as the song suggests “five miles (or 8 km) from Gundagai”.

Open daily the Old Gundagai Gaol stands at the corner of First Avenue and Byron St, surrounded by a magnificent stone boundary wall. Built in 1859, the gaol consists of a cluster of structures including, The Gaolers residence, the external kitchen block, the hospital (original gaol), the gaol including exercise yard, an outhouse, outbuilding, a well and archaeological remains.

Open daily the Gundagai Historical Museum is a treasure trove of memorabilia, with displays of pioneer life, bushrangers and even Phar Lap’s saddlecloth. One highlight of the vast collection is the two gorgets (medallions) presented to Yarri and Jacky, the Wiradjuri men whose efforts saved many lives during the great flood of 1852.

On the night of June 24, 1852 two Wiradjuri men, Yarri and Jacky Jacky, rescued one third of Gundagai town’s residents (some 69 people) in frail bark canoes from the flooded Murrumbidgee River. This great flood continues to be one of the most significant natural disasters in Australian history in terms of lives lost, with some 80 being drowned.