Did you know the Queen celebrates two birthdays a year?

Queen Elizabeth II turned 93 on her actual birthday being 21 April she was born on 21 April 1926 but does not officially turn 93 until June.

Her second birthday celebration is a public celebration held on the second Saturday of June, thus becoming the traditional June long week where the Monday following the Saturday becomes the public holiday.

So why two birthdays for the Queen and how does she celebrate them?

In the past, official celebrations to mark a King or Queen’s birthday in the UK have been held on a day that isn’t their actual birthday. The double birthday tradition was started more than 250 years ago by King George II in 1748.

He was born in November, which is not known in the UK for its good weather and wanted a big public celebration – so he decided to combine it with an annual military parade in the summer, being June.

How does she mark her birthdays?

The Queen usually spends her actual birthday (21 April) with her family, although there is s 41 special gun salutes in Hyde Park London, a 21-gun salute in Windsor Great Park and a 62-gun salute at the Tower of London.at midday to mark it.

For her ‘official’ birthday’ in June, the day is marked publicly with a big parade in London called Trooping the Colour a tradition for over 260 years. Over 1400 soldiers, 200 horses and 400 musicians take part in the event, so it’s quite a spectacle and concludes with the Queen and her family gathering on Buckingham Palace’s balcony to greet well-wishers and watch RAF planes perform an aerial display for the occasion. 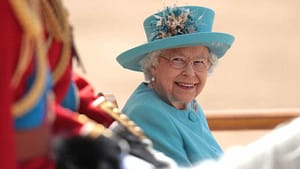