The Northern Rivers region of NSW has been included in the New York Times ’52 Places to Go in 2019′.

Rated No. 29, the Northern Rivers is listed amount other destinations like Panama, Las Vegas, Munich and New York City with Perth being the only other Australian destination to make the list.

Northern Rivers, of New South Wales, is known for its Pacific beaches and fertile valleys around rivers like Clarence and Tweed. Marked by a lighthouse and passed by migratory whales, the Cape Byron Headland Reserve near the town of Byron Bay is Australia’s easternmost point. One of several scenic drives, Rainforest Way links rainforested parks with wildlife, trails and waterfalls.

The New York Times is an American newspaper based in New York City with worldwide influence and readership. 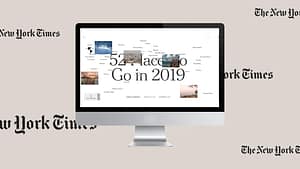